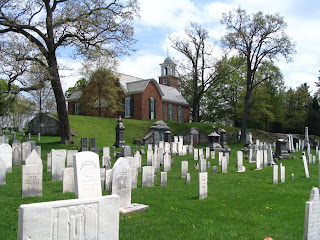 As a kid, I spent part of every Sunday at Roselawn Cemetery in Pueblo, Colorado. We would “visit” my Prijatel and Okicich grandparents, put fresh flowers on their graves, and then wander to see my parents’ various relatives and friends. It was an oddly rewarding experience. I enjoyed hearing my Mom and Dad reminisce about their pasts and I loved the serenity of the place. Water sprinklers often chattered in the background, keeping the lawn lush and the lilac trees and snowball bushes healthy and fragrant.

My Mom taught me to walk around the graves, making sure I did not walk on top of anybody, being especially careful to avoid humps in the lawn. Occasionally, we would go to the pauper’s cemetery, where there was no lawn, the gravestones were ancient and poorly maintained, and tumbleweeds were the flowers of choice. My mother had an aunt buried there in the early 1900s, and I felt like I was walking into the Wild West when we wandered through those graves, walking gingerly to make sure we didn’t step on any humps that could be rattlesnakes.

We listened to the Slovene Hour as we drove to Roselawn, and sometimes Dad left the radio running so we could hear a favorite waltz or polka. Pueblo, Colorado, my hometown, had a healthy Slovenian population, brought there to work at the steel mill, the Colorado Fuel and Iron Corporation. My name, Prijatel, means friend in Slovene. The names on the gravestones were Slovene, Croatian, Serbian. My Dad used a racial epithet for the Serbs—a word I do not remember and am fine forgetting—inheriting a hostility toward an entire country from his parents who were Slovene immigrants. The Balkans have a long history of conflict—far longer than the recent wars between Serbia, Croatia and Bosnia in the early 1990s. That conflict lived on in the cemetery, at least in my Dad’s mind.

A few years before Dad died, I recorded a walk around the cemetery with him. I wanted a record of his memories about the people. He talked about his parents, both of whom died before I was born, and about the men he worked with at the steel mill. Dad made nails, which was a great metaphor for him—he was a strong as nails and about as sharp, in both a good and bad way. He was smart and he was acidic. As we walked over the manicured lawns in early spring, with lilacs blooming and graves festooned with irises, Dad talked in his mix of censure and compliment. “Oh, look, here’s old Frank. The old [another racial epithet, this time for Italians], I always liked him. He worked hard but he didn’t take any guff from anybody.” Farther along: “Yeah, here’s Jorge. The [another racial epithet, this time for Hispanics]. Smart, really smart. He made the rail spikes and, boy, he could fix that machine in no time flat.”

Fortunately, I did not inherit Dad’s racial perspective , but I did get the love of cemeteries. When my husband and I visited Vienna, our first stop was Zentralfriedhof, the Central Cemetery, where Beethoven, Brahms, Schubert, and Johann Strauss the elder and the younger are buried. In tiny Wrangall, Alaska, we saw one of our most intriguing cemeteries, in which graves were smothered with the special symbols of the person who had died—one was done in a nautical theme, covered with a boat wheel, nets, and a photo of the deceased in his craft.

We visited the beauty in the picture above, the Old Dutch Church and cemetery in Claverack, New York, earlier this month and it made me wonder why I love to visit cemeteries. Part of it is historical interest, to continue a link with the past, to see when people died, how long they lived, and to wonder about their lives. Partly it is because of the art involved. Gravestones can be magnificent granite monuments; outlandishly ornate mélanges of angels, crosses, and hands raised in prayer; sweetly simple rocks with loving text, or roughly rustic homemade jobs with jagged, barely visible scrapes chiseled in wood.

Everywhere, though, they are a reminder that, even though these people are gone, they left behind people who loved them and who continue to remember them. I visit the Pueblo cemetery once a year or so—my parents are now there—and I like to chat with them a bit and to spend some time with the grandparents I never knew but whom I will not forget.

Americans make their cemetery pilgramages on Memorial Day, but in Slovenia, the big celebration is on November 1—All Saints Day. For at least a block before the cemetery entrance, kiosks are set up to sell everything from the obvious to the absurd. Lots of flowers, of course, are a natural. But cotton candy? And ice cream? Our visit there was like going to a carnival. The graves were covered in flowers—fresh bouquets, plants, a mix of both—and the cemetery was packed with people, as though it were some sort of fair.

It is ironic, then, that when we tried to find my great-grandparents’ graves in Slovenia, we were told that the cemetery had moved and they were not moved with it. In Slovenia, many graves are leased, not purchased outright, so when people die or leave the country and stop paying rent, the graves they left behind revert to the church or the city.

That’s what happened to my Slovene grandparents—they moved to America and the graves of their parents simply disappeared in an abandoned churchyard. Still, my parents continued the Slovene tradition of respecting and remembering the dead and passed it on to their kids and grandkids. And so we honor other grandparents, in other graves, in other cemeteries around the world.