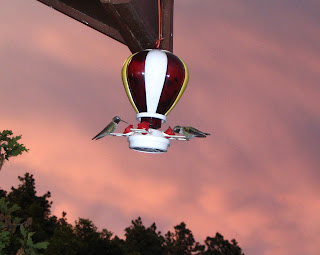 These fellows are actually called Magnificent Hummingbirds (Eugenes fulgens), as far as I can tell from my bird book. They’re mesmerizing to watch—they zip straight up about thirty feet into the air then dive back down at featherneck speed and stop on a dime. Sometimes they will fly directly into your face and levitate a few inches in front of your nose, then abrupt fly off sideways. They make a little teek sound and they do not seem to play well with others. Usually there is a dominant bird who bosses the others around and pushes them out of the feeder so he can eat. They love sugar—we feed them a cup of the crystal octane to about three cups of water. That gives them the buzz to act like bomber pilots.

This has nothing to do with breast cancer, except to provide perspective and a little beauty. I took the picture on the deck of our Colorado cabin at dusk as a storm was brewing in the background. I could try for some metaphors here:

We should embrace life like these winged creatures and fly freely, focusing just on the present. Bleach. Let’s all chirp “namaste.”

If a hummingbird, which weighs about an ounce and measures four inches long, can fly from Colorado to Mexico for the winter, doesn’t this dwarf the challenges we face? Maybe, maybe not. Personally, I would love to be able to fly. Wouldn’t you? I bet I would be really skinny if I could exercise by flying. Of course, if could fly, others probably could as well and then the skies would be a mess of people in business suits and briefcases buzzing above. Occasionally a woman with sensible heels would lose a shoe and it would pop you on your head. Next metaphor….

Hummingbirds maintain a healthy body mass index through strenuous exercise. OK, this isn’t a metaphor. And, besides, they might have a nice BMI, but look at their tummies.

As storm clouds build, look to one another for sustenance. Or look to a whole lot of sugar.

Nature’s beauty is its own reward. A truism, not a metaphor. But true indeed.